Gold prices have just travelled sideways in US$ for almost 15 months since bottoming after the April-June 2013 sell off despite strong physical demand from China and India and continuing takeup of gold coins. US$ gold has generally held its price since then but is down 34% from its high of US$1923/oz in Sept 2011 but well off the Dec 2013 sub US$1200 lows.

The picture for gold itself also is far more encouraging when viewing it in other currencies and when the sovereign bond markets are brought in we can see some fascinating trends developing.

Gold in the major currencies appears strongest in Yen terms with gold in Euros and Pounds not far behind.  The Yen looks curiously very weak against most currencies. A$ gold is steady.

The US T Bond market peaked in July 2012 and the recent falls in yields are interesting, particularly in European bonds, but it all suggest a major generational low in yields is coming soon and then everything looks dangerous to be in bonds for at least the next decade.  How will these bonds ever be repaid?

A new issue for having the security of gold is arising with the actions in Iraq and Syria that could have a major positive impact on gold prices in the very near future. Risks of the Islamic brotherhood revolts spreading into Muslim countries around the world are high and the oilfields in the Middle East and, more importantly the oil States themselves, are vulnerable.  The risks go further.  Nigeria, Libya and Pakistan are all vulnerable.

Gold shares suffered a more severe battering in their 32 month bear market from the April 2011 record highs but they too made their lows in December 2013 and many have since rallied nicely.

Bringing these all together still provides a positive trend for gold and the extreme lows in prices and cross-asset relativities for gold are considered to be well behind us now.

Gold and shares in Australian gold producers are good insurance and the markets seem to be agreeing with this.  Paradigm can help you here.

Paradigm has set up a dealing account with Capital Bullion to allow you to buy and sell gold and bullion gold coins and have somewhere safe to store them.

Please call me to discuss.

As noted above, gold in US$ has been trading in a relatively narrow band between US$1200 and US$1400 for over a year while holding a 13 year long-term uptrend of sorts and still oversold.

In the shorter term the action can be seen as within a relatively narrow band but has shown some violent action within it. It should be expected than the violent action will continue when the next market direction is confirmed.   Nevertheless the action seems to me to be very constructive and should soon be resolved with an upside break out.

Gold in other currencies is also encouraging with Euro Gold close to E1000/oz.

Gold in GBP has broken a downtrend.

Gold in Yen seems to be leading.    Something is odd with Yen just now, could it be energy dependency? Or something else? I will come back to this later.

Gold in A$ is steady but a break to the upside is due soon.

And just as an aside, it is worth noting silver.  A moment of truth coming up here.  A big break seems likely here.  Up or down? The supply and demand says break upwards.  But let’s just see.

Some very interesting graphics here to consider with the macro picture .

First.  Gold  has some long term seasonal influences .  This graphic courtesy of Dmitri Speck suggests that from September until December an average seasonal move of about 3% could be expected.  So after this seasonably sharp early September decline we could see US$30-50 rise by Christmas.    On average.  Pity this graphic didn’t include the 2013-2014 volatility. But it is what it is and it is helpful. 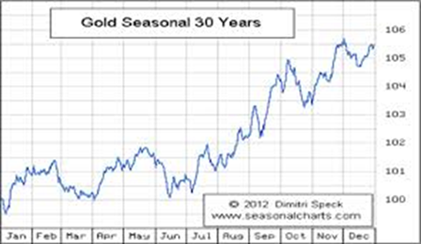 On other interesting points to consider are the US$’s recent rapid move into the Top Channel after 8 years of trying.   Is this of significance?  Should be, with improving global economic outlooks and the US leading.  The shale gas revolution is certainly helping with US energy costs and competitiveness but I still think the emerging global recovery is better for other countries than just the US. 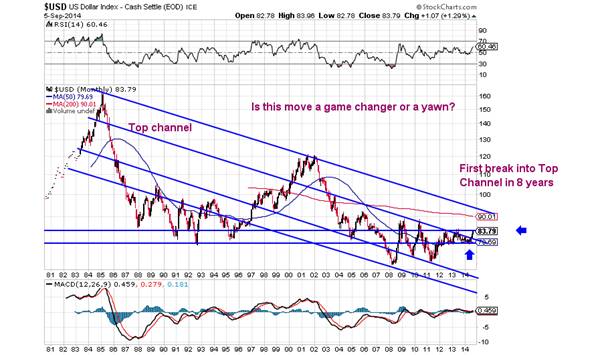 The short term for the US$ is very much overbought with it surging 4% in two months and all momentum indicators signalling overbought. 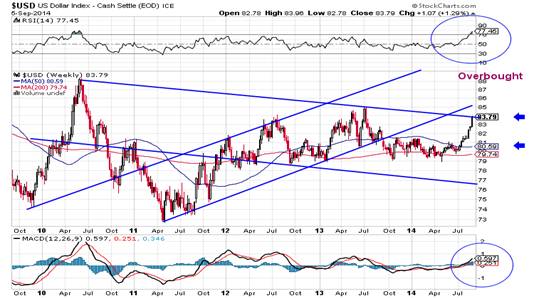 It is also noteworthy that this US$ index is rising whilst the US$ is actually weakening against the Chinese Yuan and the A$.

And with the various European bond markets rallying into parabolas it must be now saying that it is very close to the end of the global bullmarkets in bonds. 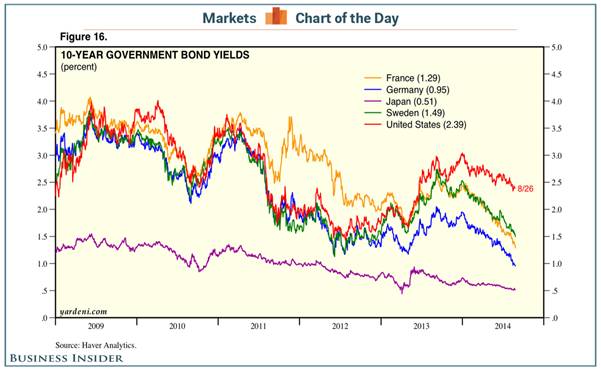 US 30 year T-Bonds had a fall in yields but it is very hard to see lower rates here. Note the low in yields here in the 30 year was two years ago in July 2012.

Especially when the recent lows in yield were not confirmed by similar strength in the 10 year bonds.

From the commodities and resources viewpoint it will be the flows OUT of these bonds that push up equity markets and commodities.  The data shows about US$80,000bn in bonds global bonds.

The local Australian resources market would be a very happy recipient of just 0.1% (US$80bn) thank you.

In the gold shares the US Philadelphia Gold Index (XAU) has bottomed and turned up after basing along a major longer uptrend.

GDXJ which is the smaller cap stock ETF.

Gold stocks in North America are still at only 30% of their long term relative value against gold itself but recent action suggests a turn is underway after bottoming and moving up.

The fall in gold stocks against the general market has been even more horrendous but that fall is over now and should start to move up again to give significant outperformance.

Here in Australia the gold sector is recovering and some excellent gains were recently made by some of the Paradigm favourites but the index has again drifted back to levels equal to the 2004 and 2005 lows. 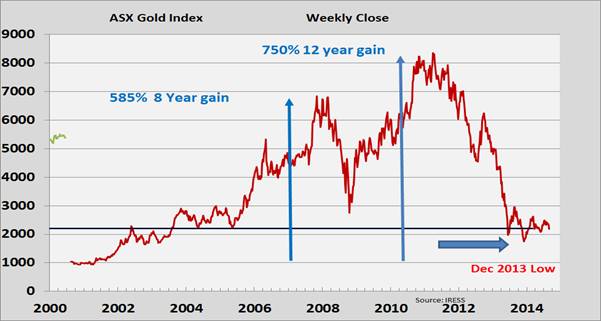 Looking at the performance of the ASX XGD it is still more than 70% below the April 2011 highs.

I still like NST, GOR, ABU, SAR and SAR with BLK and ATV very cheap.

The bottoming process is still underway as can be seen from the ASX  Small Resources but the character of the market is showing strong performances by many small resources stocks (that may not yet be in the  XSR) and a considerably stronger market that is taking capital raisings again. 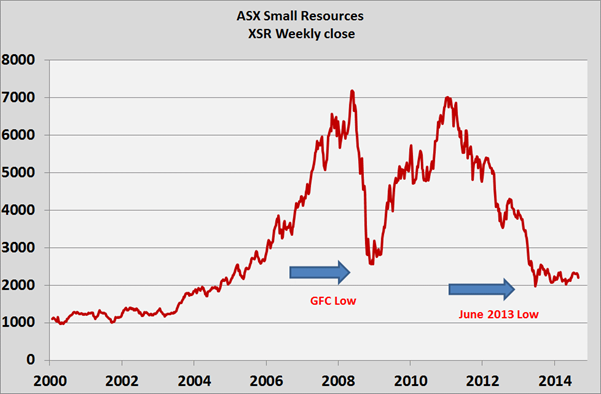 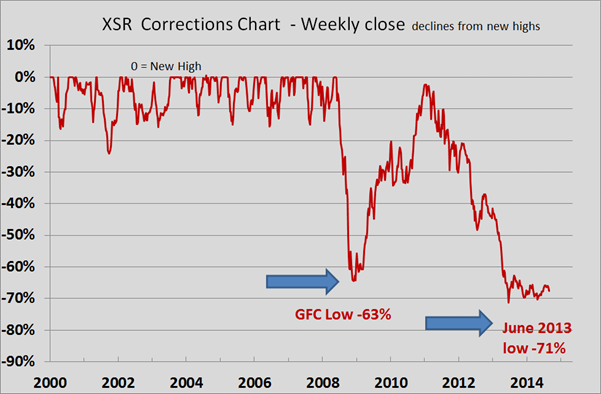 This is clearly the time to be bullish.

And to leave you with a few other things to be positive about: 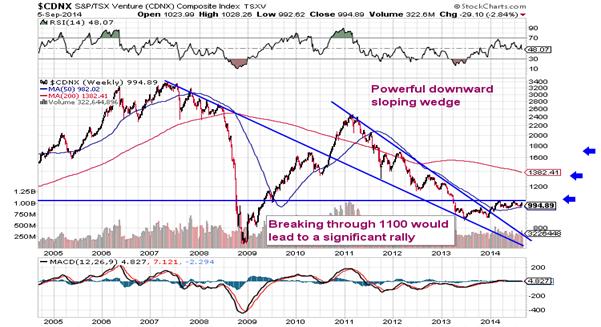 It’s all happening now in this Bull Market!!