Australian Gold Sector is having a wonderful start to 2016 with many of our preferred stocks making new all-time highs in the confluence of cost reductions, increased gold production and the highest A$ gold price in almost 5 years. The Dawes Points Portfolios of producers have provided high returns with little risk because of the strong resource asset bases, low debt levels and rising cash flows. Dividends should also flow strongly. Gains have been substantial and further gains are anticipated as the ASX XGD Gold Index heads for our 2016 target of 6000, now just 1900pts away. 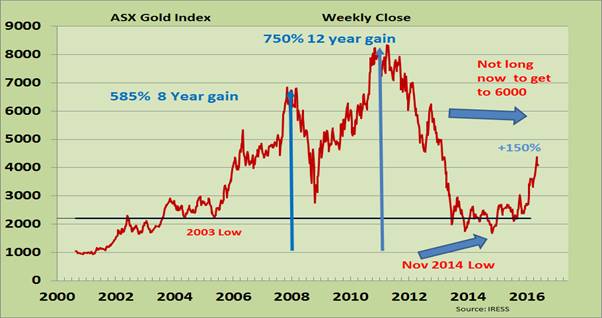 ASX Gold Stocks are still cheap on average against the A$ gold price and are not over priced by any means.

And the XGD is still down 50% from its highs. 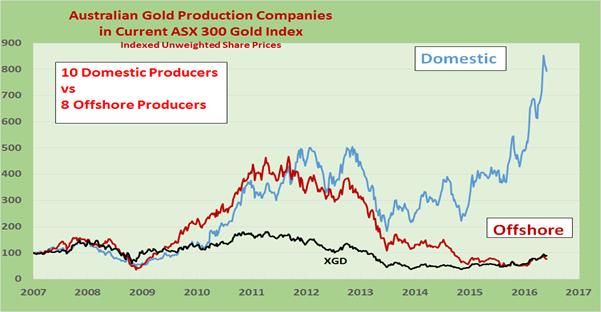 Of interest here is the past three months from the last intermediate peak in week ending 4 March.

The ASX-listed Australian based with domestic operations did well, aided by the weaker A$, and some have showed relative strength showing investor appreciation of value.

The ASX-listed Australian based with overseas operations had a mixed 3 months but PRU, RSG and TRY are showing strong relative strength and should continue to do well.

The Gold Sector share of All Ords turnover is rising nicely now to give further confirmation.

However, the ASX Gold Index is a moveable feast so we might need to be careful in our conclusions.

S&P uses its ASX 300 Index to determine the sub indices.

If a mining company fits in the ASX 300 it can be in the Metals and Mining, Small Resources or Gold.

If a handful of the 60 odd lithium stocks make the ASX300 some gold stocks might miss out.   Or if Fintechs have a run you might also miss out.

Look at this with the Gold Sector. 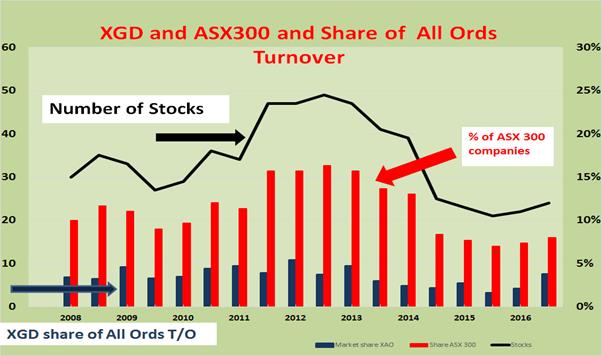 I used to think it was good when gold stocks made up 15% of the ASX300 companies.  I am now not sure what this XGD Index means now.   Do you?  Please let me know if you do.

I tend to think that ASX cast the resources sector down the river when it sold its indices to S&P.

For the Outlook, evidence set out in Dawes Points over the past year or so and more particularly in the past five months gives a reasonable confirmation that the Bear Market since 2011 has ended and that a new Bull Market is underway. The supply/demand picture for the gold market looks strong and the uptrend should last years.

The duration of the first stage from about 1999 to 2011 was as much as 11 years with almost five years of correction.  In my experience, markets will have a second leg that is at least as long as the first.  So I expect at least 10 years of bull market where an uptrend will be established that supports higher prices. But it won’t be over by then, there will be much more to correct the massive imbalances of the Western Welfare State for many years yet.

Since 2000 gold had an average annual volatility of 15.5% so possibly a 10% pa uptrend would be reasonable to start with.

However, in the Dawes Points world the A$ will rise to follow gold and gold stocks so it won’t be this high.

Nevertheless, the theme here is that once you get your core gold stocks like NST, EVN and NCM you should never be a seller.  The dividend flow will be outstanding.

Keep coming back to the long term to get your perspectives.

Gold is in a long term bull market that should run for years yet and this wave count graphic shows the strength in 2011 creating an `irregular B wave’  that was very unusual but is underpinning the great power developing in gold. Much, much higher gold prices are coming in the decades ahead. 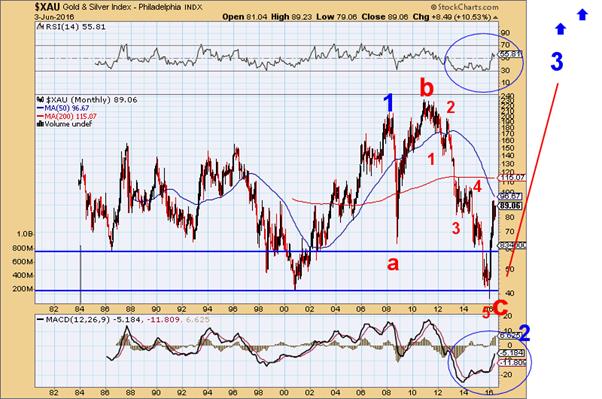 Heed the Markets not the Commentators!!

In recent times I have made a number of site visits to assess the prospects of the companies.

It is so important to visit and attempt to understand the local regional geology and mineral endowment that are so well intertwined.  Understanding this substantially reduces exploration risk because so often it means a matter of `where’ and `when’ and not `if’ mineralisation is found.

Also keep in mind that the Australian Gold Mining Industry currently has a large network of milling plant and haul road infrastructure with underutilised capacity and also excess contracting capacity so mine development lead times can be so much shorter before cashflows come through. Gold mining is a cashflow business and just not a few speculative drill holes.

The geological understanding of the Yilgarn is continually evolving and the past decade has provided some major advances.

WA Government has also made great strides in digitising the bountiful data on WA’s numerous mineral deposits as it makes it determined thrust to become the global #1 mining destination and the world’s most online efficient administration.

And look at this.

WA produces about 65-70% of Australia’s gold and most comes from the Yilgarn Archean Greenstone Belts that spread across WA in mostly NW-SE trends. 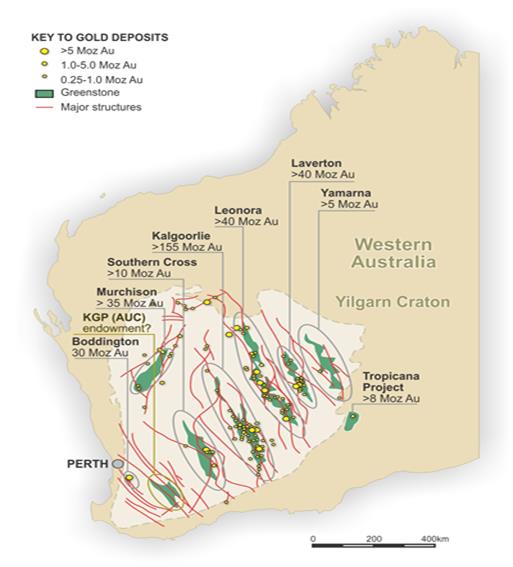 The Dawes Points regional plays are well placed with large tenement holdings in the best parts.

Elsewhere in Australia in important goldfields we have

We are invested in most of these and we can sit back and watch, share and finance the growth over the next decade.

There will be more of course and we will applaud and encourage our explorers and keep in mind that about 68% of Australia’s landmass has some sort of surface cover so the search for deposits without outcrop can run for many years yet.

We are also watching the true explorers with base metal and gold targets. Think of THX, CZI and ARS in particular.  Has ARS found another copper-gold porphyry in NSW?

And reading the IRESS news flow it seems the gold stock analyst community has still yet to understand what is happening. The numerous upgradings of a price target of a stock to 20% below the current price in a moving market shows they are still `on the wrong side of the market’.

Hold the course or jump on board now. The journey should still be long and rewarding.

Barry Dawes
I own, or control in diversified portfolios, most of the stocks mentioned in this report. 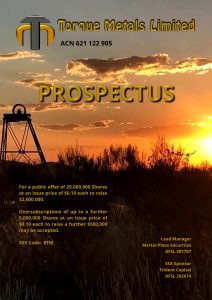