The bottoming process for the upturn is getting stronger

by Alison Sammes
Robust market action is signalling Australian Gold Stocks are leading the global recovery in resources stocks.  Resources equities are also displaying non confirmation of the weaknesses in physical commodity prices and the underlying demand for resources raw materials continues to make new records in consumption.  Continuing declines in LME inventories suggest physical demand is at odds with the negativity infecting futures markets and some sharp upside resolution may be at hand. Furthermore, recent COMEX participation trends in gold and silver futures are showing massive short covering and new long positions being set by commercial traders while the general poor sentiment has encouraged speculators and hedge funds to increase their bearish bets. A major change is likely to develop soon. In the past 12 months since the important 6 November 2014 low at 1642 the ASX 300 Gold Index (XGD) has provided a 51% index gain and the Paradigm 1 Dec 2014 nontraded 17 company gold stock portfolio is up 72.3% unweighted (including 1.2% in dividends) and 78.6% weighted (including 2.0% in dividends) against XGD's 46% gain from 1 Dec 2014.  XGD is up 21% from 1 January 2015. 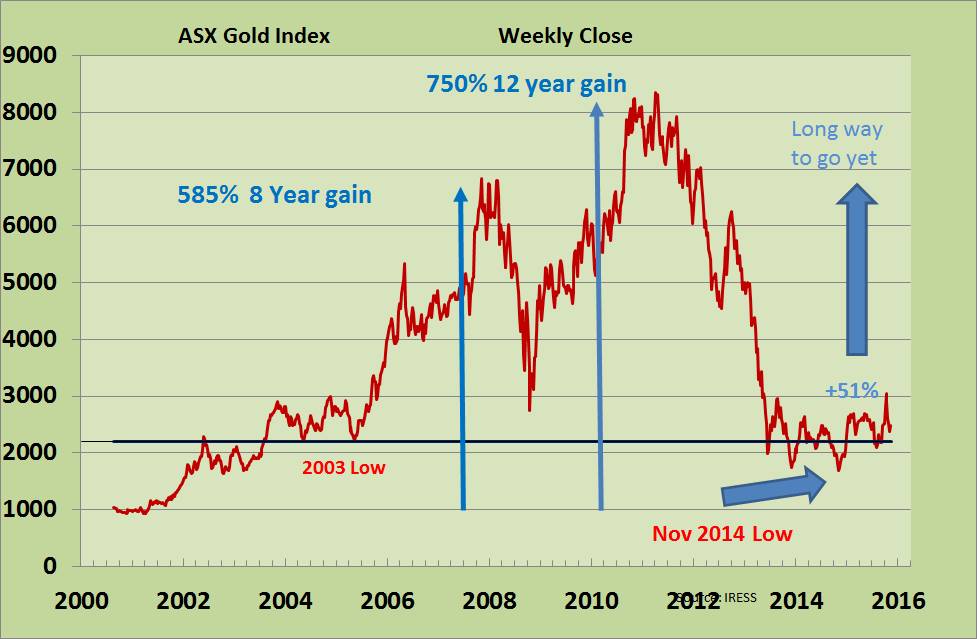 The XGD is barely above the levels of 2003 and PERs and yields are now very attractive for this sector.  Also the buybacks of so many Australian gold mines from the likes of Barrick and Newmont is actually giving domestic companies a more significant share of Australian gold production again. The A$ below US$0.75 has provided an average gold price of around A$1,550 so far in 2015 and helped a large build up in cash for gold producers. Dividends are flowing again.

Gold production in Australia is increasing and several new important expansions should see further growth over the next several years.

Source: BREE and Paradigm estimates The action in the gold share market here in Australia is strongly suggestive of the bottoming process being mature and the real long term uptrend in gold and gold stocks is resuming. As stated, this market action is very constructive and an improvement is being noted in market breadth, smaller stocks are running and investors are taking up capital raisings again. I actually have my first gold sector IPO sponsorship since 2007 now underway with A$4.2m for Golden Eagle Mining coming soon. The market action is very encouraging with XGD's share of All Ordinaries market $ turnover now well over 2% again and looking to double from here.

The prospects for earnings and dividends is what drives stock prices and gold companies always have also had the option value of a higher gold price or increased resources.  The prospects in recent years have been quite the opposite so all option value has been squeezed out and value is now substantial. The prospects now are greatly enhanced but sentiment is still very poor so the opportunity has ''once in a generation'' status. The XGD is still 70% below the April 2011 high when A$ gold was A$1408/oz.  It is now A$1550. 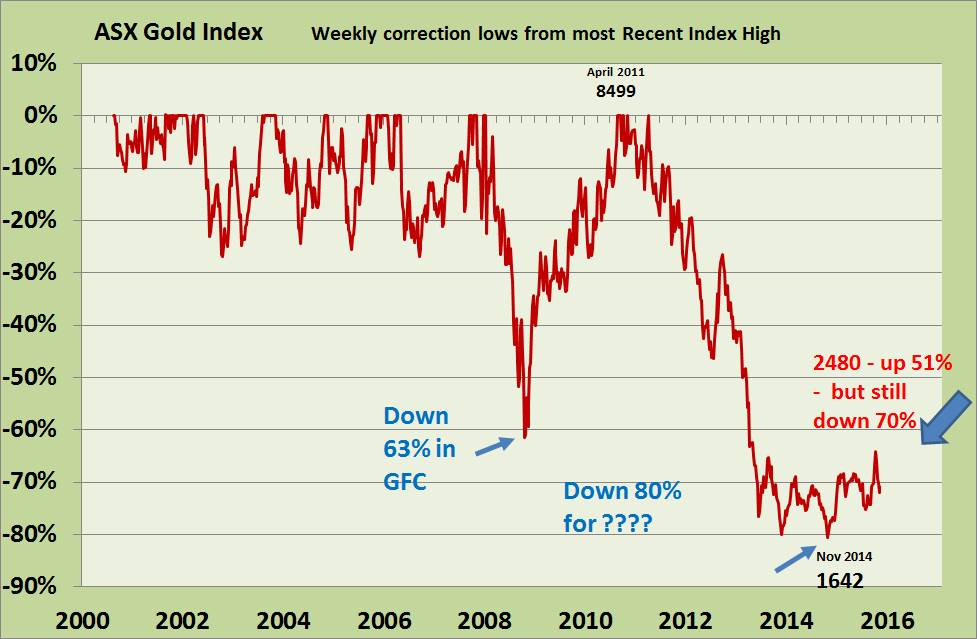 As always, it is important to put all market action in to perspective and to consider what the markets are really telling us. Again, the adage, `heed the markets, not the commentators' has helped so much. The markets are also saying that the physical demand from India and China is strongly underpinning demand and that, in great contrast, the record level of over 300 futures contract ounces sold for each deliverable ounce registered on COMEX says a serious mismatch might just develop along the way. The current market is not a just a random point in time but a manifestation of the long term global outlook but coloured by today's sentiment. Returning to my previously published long term themes we can note that the oil price bottomed at around US$10/bbl in Dec Qtr 1998 and then had almost 10 years of rising prices before peaking at US$147 in May 2008.   The CRB index of commodities (itself highly skewed to energy) showed a similar rise. The forces behind the commodity bull market were global growth and the remarkable entry of China and its voracious demand for raw materials.  From the resource sector perspective, the rise of the steel industry in China to over 800mtpa and China being responsible for the consumption of around 50% of most industrial metals dwarfed anything in modern economic history. Export volumes and market prices were very strong and the marginal increases in demand required marginal increases in output and often these marginal increases were from marginal projects. So a slowing in demand growth created a change in the market momentum and sentiment and brought about a sharp fall in prices and over seven years of bear market since mid 2008. The speculative blip was 2010-2011 but this has now been thoroughly squeezed out. We can see this in the performances of the various resources indices in terms of price but we can see this even more painfully in the declining share of ASX market turnover. Mining and Metals had 25-30% of turnover for 2007 to 2012 with spikes to 35%.  Its down to just 13% now.  Google, Apple, Tesla and banks have been far more attractive to investors. But this downtrend has now broken and like the Gold Sector is attracting accumulation.

However, we should all note that the real reason for this improvement is what Dawes Points has been saying all along. The Chinese economy is still growing and with the important One Road One Belt Silk Road concept the demand for raw materials will be maintained and will continue to grow. Crude steel production has held up well against the calls for a major fall but surging steel exports to ASEAN and to the numerous China-sponsored infrastructure projects in many parts of the world have hidden weaker internal demand.

Nevertheless there has been a major drawdown of iron ore  inventory on the part of the steel mills in China, a drawdown in the port stocks in China from over 110mt to under 90mt and all the major producers have run down their own mine and port stocks.   Obviously the high cost exporters around the world have stopped and domestic magnetite concentrate production in China is falling sharply at last. I had expected a short cover rally in iron ore in this half year as this inventory reduction is readjusted upwards but it hasn't eventuated. Consumption of most metals however is still at record or near record levels and LME inventories continue their declines.

This is not the stuff of recessions and major declines in economic activity. The GFC only spurred China onward but its 1,375m people have had a taste of a better life and this can only grow stronger. China has also the long term goals of its westward-looking agenda that aims to link not only the 3,300 mi people Dawes Points referred to over the past few months but to Europe linking another 1,100m to East Asia. In today's crisis with IS in the Middle East, the infrastructure quest through the `Stans might actually change the power base and outflank the extremists and lead to Islam's own Reformation.   Who knows! We still need to continually revise what we think of China.  Those 1,375m people will be 1,400m very soon and the build of infrastructure will continue to change trade patterns. The Dongfang Modern Agricultural Holding Group IPO by Paradigm Securities also gave us a very important window into another side of China.  (The IPO raised over A$39m and so far has reached a peak of 45% gain on the IPO price.) China has so many important regions that have over 200m people individual economies that can be operating economically quite separately from each other so we should be wary of commentary from Guangzhou or Shenzhen close to Hong Kong when all the action might be in faraway Chongqing or Chengdu. So China has this combination of 50% of global consumption on one hand and then the emergence and entry of so many new intermediaries with different trading policies and procedures.  For the resources sector this really means numerous new players in the supply chains and the participation of these new traders with or without inventory.  Who is long or short on anything?  Who is a producer or user? Extremely hard to know yet. More new players are in the markets but many of the established groups elsewhere in the world are now holding back. Could this be new but inexperienced players trading in the futures markets? Following the sentiment and not the facts?  Heeding the commentators and not the markets?

In my experience, all this is almost guaranteeing a return to robustly positive markets in the decade ahead. In contrast, the market place is still extremely bearish and copper hit a six year low last week but some interesting things are taking place elsewhere. Firstly here at home Australia is a major global producer of raw materials. The lower A$ has been very helpful in allowing A$ cost producers to recover and rapid changes have been made in the domestic cost structures as well.  Some stocks are holding up well and like the Gold Sector, are leading the world out of the gloom. On a bigger scale, the performance of commodities and the equities of those companies that produce and use them often give us clues to the sentiment of the market place. Oil may be bottoming because major integrated oil and gas companies' stock prices and the US E&P indices are not confirming recent lower oil prices. Oil demand is still rising at 1.5mbopd each year and US tight oil output is declining. We can look at Exxon, Conoco, Chevron, SHELL, BP and BG Group to show constructive market action and the S&P E&P (Exploration and Production) Index may be indicating its 60% fall in 18 months is overdone.   In Australia, Woodside, Beach/Drillsearch and Origin look better and Santos after its capital raising might just get by. Iron ore stocks FMG and Rio are not confirming a lower US$ iron ore price although BHP and Vale are weaker and are carrying the weight of the SAMARCO tailings dam collapse.  (We might ask what the Brazillian bureaucracy was doing about the standards they had previously laid down.) All this is against a global economy that hasn't fallen over and the US, China and India may just get stronger.  Even Japan with its stagnant economy is still cranking out steel at full capacity of 110mtpa. So the outlook is looking even more encouraging and for us in Resourcesland this graphic below is speaking volumes in clear data. Our basic livelihood of emerging resources companies (XSR) is showing another clear break in the decline of market share of All Ords turnover. The market for small resources is improving.  This is hard evidence here but the signs are everywhere.

Interestingly, while the XMM and ASX200 Resources were breaking to new lows the XSR has been assisted by the XGD and has held up well. Dawes Points also knows this from recent capital raisings for small resources companies.

The major trend assessments for investment markets have to start with assessing the direction of the bond markets. It is so clear that the growth figures in the US with record sales levels in many markets sectors and declining unemployment that interest rates must rise. US Housing Starts are still well below replacement levels of 1.5m units pa and the Philadelphia Housing Stocks Index looks to want to surge soon. 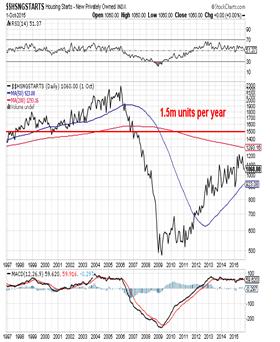 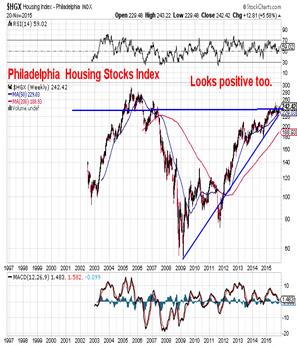 So the US bond market is looking very toppy with the 10 year having its peak over three years ago.  It is taking a long time to roll over but the result is inevitable.   The downward adjustment could take place at anytime now and the raising of short term interest rates may be the trigger. 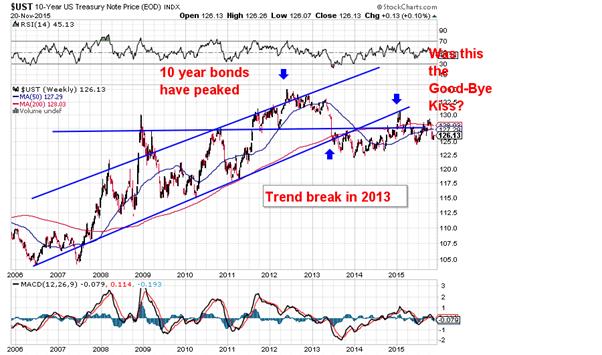 The world has invested almost US$90trillion in bonds. Even a tiny flow into hedges could be massive in commodity and resources stocks.

Stocks to think about

The recommended Gold stocks noted above are for Core Positions that should be held for years and not really traded. Stock  |  Price cents (AUD)